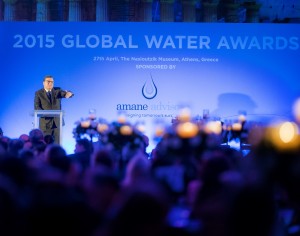 Nominations will be open for the 2016 Global Water Awards from 5 November 2015 to 31 January 2016 at www.globalwaterawards.com, organised by Global Water Intelligence and sponsored by Evoqua Water Technologies.

GWI established the Global Water Awards in 2006 out of a desire to recognise the initiatives and projects that were really doing something to make the world of water work better. Now in their 9th year, these Awards are about capturing what is new and what is working and making a difference to water. We’re looking for those initiatives in the water, wastewater and desalination sectors that are moving the industry forward through improved operating performance, innovative technology adoption and sustainable financial models.

From tomorrow, you have until 31 January 2016 to nominate. After that date, our panel of experts will begin the difficult task of filtering out the short list. With the shortlist published online and in print in February 2016, voting will be open to readers of Global Water Intelligence and the Water Desalination Report, and members of the International Desalination Association (IDA).

The provisional 2016 categories are:

Water Company of the Year – For the water company that made the most significant contribution to the development of the international water sector in 2015.

Public Water Agency of the Year – For the public sector organisation that made the greatest contribution to meeting the challenges of water supply during 2015.

Desalination Plant of the Year – For the desalination plant, commissioned during 2015 that represents the most impressive technical or ecologically sustainable achievement in the industry.

Water Reuse Project of the Year – For the project, delivered during 2015 that represents the most significant advancement in terms of water reuse.

Industrial Water Project of the Year –For the project, commissioned in 2015, that represents the most impressive technical or environmental achievement in the field of industrial water.

Desalination Deal of the Year – For the deal, closed during 2015, which represents the most significant step forward for the industry in terms of financial innovation or in meeting the demands of challenging circumstances.

Water Deal of the Year – For the financial initiative, signed in 2015, which has made the biggest contribution to the advancement of private sector participation in the international water sector.

Water Technology Company of the Year– For the company which has made the most significant contribution to the field of water technology in 2015.

Water Performance Initiative of the Year – For the initiative undertaken by a water utility during 2015 which represents the most significant commitment to improving the long-term performance of water  services to the public.

Corporate Water Stewardship Award – For the commercial or industrial organisation that has made the greatest contribution towards the sustainable management of its water cycle or in reducing its water risk exposure during 2015.

Water/Wastewater Project of the Year – For the water or wastewater treatment plant, commissioned during 2015, that shows the greatest innovation in terms of optimising its physical or environmental footprint

Water Technology of the Year (Tech Idol)  – For the early-stage company whose technology could change the future of the water market.

GWI reserves the right to change or amend these categories at any time during the nominations period, depending on what level of response we get in the various categories.

For details of the 2015 winners and how to nominate see

The Global Water Awards will take place at the Global Water Summit 2016 on 19 April in Abu Dhabi a the Gala Dinner held at the Emirates Palace and sponsored by Evoqua Water Technologies.